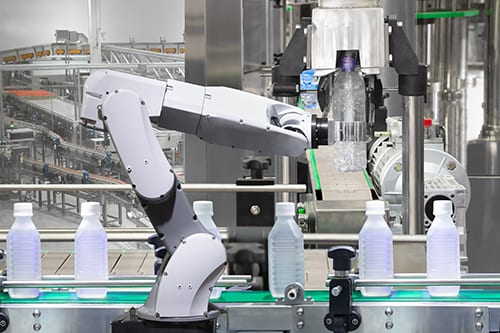 Industrial manufacturers use different types of robots to automate tasks, reduce operational costs, eliminate waste, increase production and maintain worker safety. Demand for this technology continues to grow as it leads to high precision and repeatability.

Manufacturers can enhance production quality and efficiency by understanding these five types of industrial robots.

Articulated robots are most common in today’s industrial world. Their mechanical structure is similar to that of a human arm. The arm is typically mounted to a base with a twisting joint, resulting in great flexibility, dexterity and reach.

Articulated robots are capable of operating in dirty environments and can access hard-to-reach areas. Additionally, they can align to multiple planes. However, due to their complex mechanical configuration, these robots usually involve complicated programming and maneuverability. They’re typically used for the following tasks:

SCARA robots work at high speeds and take up little surface area, making them good for crowded spaces. However, they face limitations when it comes to reaching in and around objects, such as various machine tools. These robots are typically used for the following tasks:

Also mounted above workspaces, cartesian robots are designed to maximize space. Operating with high accuracy and ease, they work similarly to claw machines at arcades and usually need a large area to operate.

Cartesian robots are often used to transport heavy items. They move up and down, in and out and side to side. These robots are popular for 3D printing and computer numerical control applications.

The custom nature of cartesian robots often leads to design and programming challenges. Plus, it’s hard for them to reach into or around obstacles and their exposed sliding mechanisms make them less suited for dirty work areas. Linear movements mean this robot is limited to only one direction at a time. These robots are usually used for the following tasks:

Cylindrical robots feature a rotating shaft and extendable arm that moves in a vertical, sliding motion. These robots have a cylindrical work envelope that makes them useful in tight spaces. Installation and operation tend to be simple, but these robots usually can’t reach around obstacles due to lower accuracy.

These robots, which aren’t common in new designs, have often been use for the following tasks:

Industrial pros should know the different types of robots

By understanding the different types of industrial robots, manufacturers can select the best machines for their operations. Ultimately, this helps them enhance production quality and efficiency.