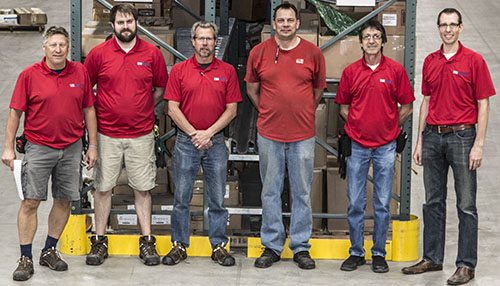 But red is extra special.

It all started in the mid-90s, on a day that seemed like any other. Dohm was working the front desk at Border States’ Fargo branch, when a thought popped into his head.

“Supporting my fellow troops has always been my forte, and I wanted to express my appreciation for their service,” Dohm says.

Dohm proposed that, in addition to the branch’s standard line-up of shirts – one for every day of the week – there should be one shirt that honors the United States Armed Forces. Every Friday, he began sporting a customized red shirt he ordered from Fargo-based White Banner Uniforms.

“I appreciate that Border States promotes a culture of military support,” Peterson says. “We have the right to be free because we have a military who fights for our country – and other countries.”

The name Red Shirt Fridays comes from an existing nonprofit that made the shirts an official calling card of military support.

“I get tears in my eyes,” Dohm says. “I’m just so proud to have been part of the military and part of this country.”