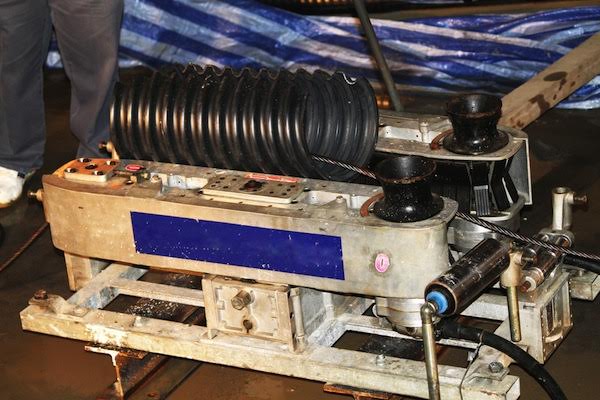 Equipment powered by electricity has made the job of pulling electrical cables through conduits considerably easier. Cable pullers make use of a power source, which fuels a turning capstan, which in turn pulls wire and a special kind of pulling rope. Prior to the availability of cable-pulling equipment, this task was performed by hand.

Cable pullers today come in different sizes and are often portable. They can also handle various pulling forces, with some models able to take on around 10,000 pounds.

Click here to learn more about a range of cable pullers and accompanying accessories at Border States.

Feeding tape through a conduit is a necessary first step before it’s pulled through, which is made possible with fish tape. This is used primarily on smaller projects, and is often the preferred method for pulling wire through conduits.

Click here to check out the fish tape that is available at Border States.

When cable pullers are used, they make use of special pulling rope that must be incredibly strong and able to handle friction. It’s important to know the tension capabilities of pulling rope, as well as how friction affects rope when it’s used on a capstan and how much it will stretch.

A rope that stretches is not acceptable because, like a stretched rubber band, it will be released if the rope snaps, causing the cable to potentially recoil and injure someone. Double-braided composite rope is the best choice for pulling because it’s like two ropes in one. It’s a high-strength, low-stretch rope.

Click here to check out the wide range of pulling rope at Border States.