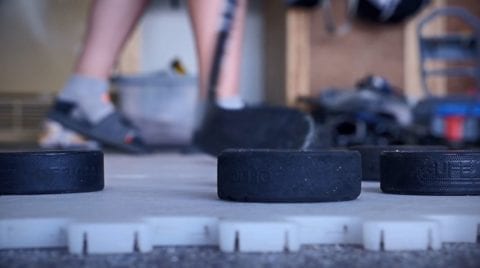 It may be summer, but Mark Lester can’t seem to keep his feet off the ice.

A 20-year volunteer for the West Fargo Hockey Association, Lester has loved youth hockey since his son entered the program as a “Mite” at age 7.

“Every year I say it’s going to be my last year – it never is,” says Lester, Border States transportation manager in Fargo, ND. “When I see the kids come out and start skating, I remember what the program is all about, and why I continue to want to be a part of it. Our youth hockey program gives approximately 600 kids something fun to look forward to, both indoors and outdoors, as opposed to playing video games all day.”

One of the association’s many programs is the 10,000 Pucks Club, which is organized through HockeyShare, and encourages kids to fire 10,000 pucks into a net during the summer. Many young athletes accept the challenge each year – whether it’s in the arena or on a driveway.

Lester and Keith Holland, who serves as Border States’ director of services and solutions, were the ones who initially asked the company to help sponsor the 10,000 Pucks Club. Five years later, Border States continues to donate toward the program, which many employee-owners utilize for their kids.

At the end of the day, Lester says he appreciates working for a company that helps him give back to his community.

“It’s great that Border States has shown support,” Lester says. “For guys like Keith and me, who have put thousands of hours into this program, it’s nice to have your employer believe in the impact you’re making in kids’ lives.