LED Predicted to Be Top New Lamp Installation in 2014 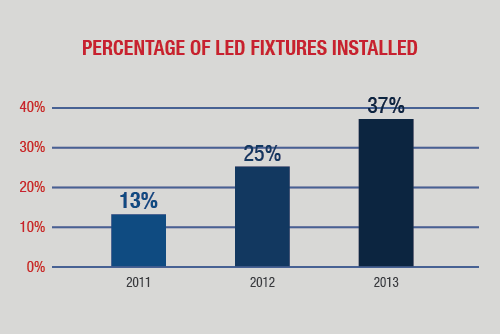 LED lighting is expected to overtake all other lighting options and dominate as the top new lamp installation in 2014.

The fourth annual state of the lighting industry survey gathered responses from 5,000 lighting professionals. The survey found LEDs accounted for 37 percent of all lighting fixtures in 2013.

LED installation has grown as technology improved and prices dropped. The growth is predicted to continue.

With the rate at which LED installations are increasing, they are on track to surpass compact fluorescents for the first time ever as the most installed lamp type in 2014.

With the phase-out of popular incandescents by new regulations, contractors can expect to see more consumers demanding energy-efficient lighting options such as LEDs.

The survey indicates 82 percent of lighting professionals predict the market for energy-efficient lighting will increase in 2014 with LED leading the charge. In the past three years, the average growth rate of LED lamps has increased 8 percent.

This year, 49 percent of lighting installers plan to use LEDs, up from 26 percent the previous year. Demand for linear fluorescents is expected to drop from 68 percent in 2013 to 46 percent this year.

Why Consumers Are Increasingly Choosing LEDs

Because the economic and environmental benefits of LED are becoming well-known, more and more consumers are choosing to switch to LED.

According to Forbes, “Improving economic conditions, innovative new products […] and the narrowing price gap between LEDs and conventional technologies, are all key factors driving LED adoption.”

Consumers who choose LEDs instead of other lighting options benefit from more bang for their buck with more lumens per watt, increasing energy savings, enabling LED lamps to help pay for themselves over time. money and paying for their lamps over time through energy cost savings.

Not only are LEDs more energy efficient than incandescent and CFLs, they also last longer than these lighting options, according to the NRDC.

Contractors can anticipate increased use of LEDs by the commercial and residential sector, according to the survey. With lighting professionals expecting growth in the market for LEDs, the majority of survey respondents believe the energy efficiency industry will see revenue gains in the future.